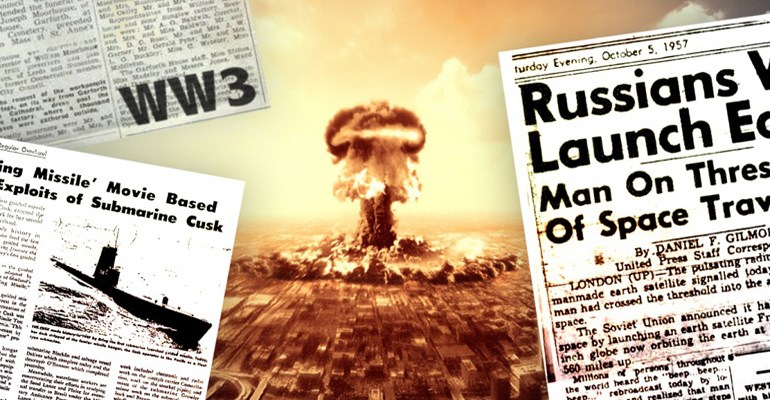 Tensions in the South China Sea involving a number of countries in Asia region – there are no signs of coming to an end peacefully – could be the United States (US) will be involved in it too. Big lust North Korea continues to arm itself with Inter-Continental missiles – based claims its leader, the missile is capable of reaching the United States. The conflict in Syria prolonged – which also includes Iran and Russia in it, Israel actions showed no sign of peace everlasting with the Palestinians and its surroundings, and the election of the controversial leader Donald Trump as president the US – which has been shown not friendly to China, ISIS and the country which he suspect as an exporter of terrorism (whether what country is it) – and is known as a supporter of Israel – all of those reasons is potentially escalated in the future, triggering World War 3 (WW3).

This editorial analysis, Calvyn Toar, assemble about 11 countries potentially trigger the war between the country in a short time, the scale of the war could escalate into World War 3.

Conflict on the Korean Peninsula is like a thorn in the flesh. With a specific reason, North Korea could quickly carry out deadly attacks on South Korea. Given a large number of weapons (nuclear) held off North Korea, in the not too distant future, South Korea can be burned.

Regarding the North Korean leader, Kim Jong-un has boasted that the US would be easily attacked and bombed the South Korean capital, Seoul, in an instant.

Their past history as a bearer of communist ideology, it can be pushed Russia and China are on the side of North Korea.

If the UN (United Nations) is not able to mitigate and minimize the escalation of the war, of course, US allies (German, English, and French) will be soon involved too.

As a result of (if) the two Korean war broke out, then Japan is the country with an unfavorable position. Rising Sun is very likely to be involved because of the escalation of the war the two Koreas, and tensions in the East China Sea and the South.

Indeed, the Japanese forces did not stand out after World War II (1939 to 1945), for two main reasons: subject to their pacifism principle (all forms of war and its consequences is wrong – the way of peace is better than war), and its military only limited to national defense.

China’s huge appetite that wants to dominate the East and the South China Sea, and the pride of North Korea could encourage Japan to return to show off as a country that was once the strongest military in East Asia.

So far Japan has not seen men publish military power, but who can doubt the experience and tactics of fighting the Japanese in the past? Who can doubt the intelligence of Japan in terms of technology – a technology that may be converted into a key tool weaponry system?

So, do not underestimate the Japan’s defense forces today! Japan fits this phrase: Quietly, sweep!

The battle over the South China Sea area is unlikely to be completed in the near future, and in a peaceful way. Why? Because there is 3 million square kilometers territory that has no sign it will be divided by China to the Philippines, Vietnam, Taiwan, Brunei Darussalam, and Malaysia – they are 6 countries that involved in the South China Sea dispute.

This is not only about the islands in the South China Sea want to be fully controlled by China, but the economic potential in the region is their number 1 reason.

According to data from the US, the region is believed to be the international trade traffic, with a very high value, which is $5 Trillion per year. Related to that, in 2035, an estimated 90 percent of freight traffic of petroleum from the Middle East towards Asia will cross that sea. And this sea also stored oil reserves of 11 billion barrels and natural gas reached 190 trillion cubic feet.

Although in 2013 the Philippines has won the case of a unilateral claim of China over the Spratly Islands and Scarborough (Huangyan Island) via the International Arbitration Court in The Hague, Netherlands – China does not budge. Indeed, China continued militarization of the sea. In one group of rocks in the Spratly Islands, China builds some sort of military bases, which can accommodate aircraft and a place for Chinese fighter ships to anchor.

Beijing Party knows very well that the Spratly Islands should still be the status quo because at least they claimed for Vietnam and the Philippines. But unilaterally, China continues to build military means and civilian in the islands with the argument of the region is a territory constituted under the demarcation line nine-dash line set by Chiang Kai-shek in 1947 – and according to China, the development of infrastructure that will benefit all countries around the island.

Taiwan was not included as a trigger for a war in the region, because the country was labeled China as a rebel province that it would not be brave enough and strong against the forces of China, in the absence of US support.

United States (US) became the country’s most sultry look lunge China in the South China Sea. That is why US Secretary of State during the reign of Obama, John Forbes Kerry and Secretary of Defense Ash Carter sent a letter to Beijing to ask China to stop all forms of infrastructure development in marine areas, primarily in the construction of military bases in the Spratly Islands. If China does not recognize this, the US is threatening to happen a serious problem there.

However, a reprimand and a tough US request were ignored China. Development of military and civilian facilities continues to speed up China and supposedly continues to spread in other parts of the northwest region’s lucrative economic potential.

With Donald Trump as president of the USA, the tension in the region could spark a war. In other words, stay where countries in the region that began, the US is almost certainly involved. Or, it could also the US first provoke a war with China over the reasons for justice in the South China Sea.

Not only the US presence in the South China Sea could trigger a war. Trump plans to move its embassy in Jerusalem can trigger open warfare. However, for the Palestinians, Jerusalem is considered as one of the holy city. If the standing of the US embassy there, it was not just an insult to the Palestinians, but also stepped dignity of the Islamic world.

For the reasons to eradicate anti-government rebels, the regime of Syrian President Bashar al-Assad continues to burn down his own country. The latter case, the city of Aleppo, Syria bombarded and its allies, Iran and Russia, as it becomes the base defense of anti-Assad rebels.

Through the Secretary of State in the Obama era, John Forbes Kerry, have protested violently attacks Syria and its allies, because they have slaughtered millions of people participate Aleppo.

However, protest Washington, unheard Syria Cs. With Donald Trump as the US President, the escalation in Syria that does not subside might involve the US to join in the battle arena. Acting as the world’s policeman, and the name of humanity, defended the rebels who may be considered the US as freedom fighters over the Syrian Assad regime.

In the context of anti-US, very likely, a number of countries who has always demonstrated their dislike for all US policy abroad that are considered to intervene in the affairs of other countries, hegemony and one-sided in attitude (always defending Israel) – countries that can united against the united States when World War 3 broke out. Countries that can be opposed to the US and its allies are Bolivia, Venezuela, Lebanon, Pakistan, Iran, Syria, Cuba, China, Russia, and North Korea.

Then, what about Indonesia, the region of the sea, too, recognized force by China of 30 percent, which is the Natuna waters – whether Indonesia will be an open war later when China annexed the reckless rich Natuna oil and gas? And the list of 11 countries Potentially Triggering this world war 3 will be 12?

Reading Indonesian foreign policy that always puts peaceful diplomacy, it seems that the track Indonesia will be played. Indonesia will never lead to war! However, if the sovereign territory seized by force, Indonesia could be forced to take it back. The National Republic of Indonesia (NKRI) is set in stone!

As Japan, Indonesia is outnumbered in weapons by China, but the tradition of (experience) homeland war of Indonesia has tested hundreds of years, and pervasive in the blood of the soldiers. For the sake of the Homeland, Indonesia is not afraid of any country. China don’t try! [CT]